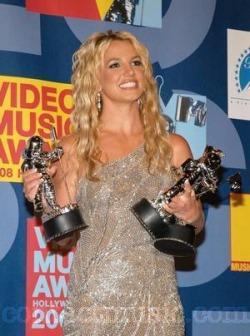 The Toxic star - who made the headlines with a shambolic performance at the 2007 show - was the talk of the Los Angeles event for the right reasons on Sunday.

Britney, 26, admitted she was "speechless" to claim her first ever VMAs, which included the top prize of video of the year.

"Consider this the resurrection of Britney Spears," he said. "If there was a female Christ, it's Britney," he added.

However, US pop sensations the Jonas Brothers were the target of Brand's ire, as he made fun of their purity rings.

The controversial British comedian also took a pop at current US president George Bush during his opening monologue.

"Some people, I think they're called racists, say America is not ready for a black president," he said, referring to Barack Obama's bid for the White House.

"But I know America to be a forward-thinking country because otherwise why would you have let that retarded cowboy fella be president for eight years.

"We were very impressed. We thought it was nice of you to let him have a go, because, in England, he wouldn't be trusted with a pair of scissors," he joked.

Video of the year:
Britney Spears: Piece of Me

Male video:
Chris Brown: With You

Dancing in a video:
Pussycat Dolls: When I Grow Up

How's this for a twist: Of all the No. 1 songs in the 50 years of the Billboard Hot 100 chart, Chubby Checker's "The Twist" ranks as the most popular single. More...