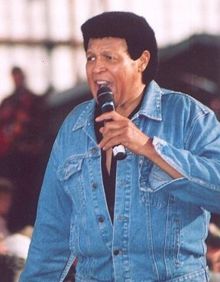 NEW YORK -- How's this for a twist: Of all the No. 1 songs in the 50 years of the Billboard Hot 100 chart, Chubby Checker's "The Twist" ranks as the most popular single.

Elvis and the Beatles didn't even make the top five.

Checker's ranking may come as a surprise to some, but not to the classic rocker.

He compared "The Twist" - named by the Rock and Roll Hall of Fame and Museum as one of the 500 songs that shaped rock 'n' roll - to the creation of the telephone as a groundbreaking moment because he said it was the first time people were dancing "apart to the beat."

"Anyplace on the planet, when someone has a song that has a beat, they're on the floor dancing apart to the beat, and before Chubby Checker, it wasn't here, and I think that has a lot to do with me being on the charts," he said.

Santana's "Smooth," featuring Rob Thomas, is the No. 2 most popular, followed by Bobby Darin's "Mack the Knife," Leann Rimes' "How Do I Live" and "The Macarena" by Los Del Rio.

The Beatles did make the top 10, coming it at No. 8 with "Hey Jude." But Olivia Newton-John's "Physical" and Debby Boone's "You Light Up My Life" are ahead of that hit. Rounding out the top 10: Mariah Carey's "We Belong Together" at No. 9 and Toni Braxton's "Un-break My Heart" at No. 10.

Geoff Mayfield, director of charts at Billboard magazine, acknowledged that the list might not jibe with some fans' personal thoughts of the most popular songs of the past 50 years.

"This is simply a chronicle of how each of these songs performed in their era on the Hot 100. We're not saying these are the most memorable songs of your life. That would be something that's almost impossible to determine," said Mayfield. "Everyone has a subjective frame of reference."

The Beatles do top Billboard's all-time Hot 100 artists, followed by Madonna, Elton John, Elvis Presley, Stevie Wonder, Mariah Carey, Janet Jackson, Michael Jackson, Whitney Houston and the Rolling Stones. Billboard.com is breaking out some of the other chart achievements (the list of most No. 1 singles by an act is topped by the Beatles) on its Web site.

Initially, Billboard relied on stations to report the most popular songs, and got sales surveys from record stores. But Mayfield said stations often stopped reporting on a song's popularity if it was no longer a priority for record labels. And in 1991, Billboard began relying on sales data from Nielsen SoundScan and airplay data from Nielsen Broadcast Data Systems. So Billboard weighted certain songs from different eras to make sure all songs were on an even playing field.

Checker's "The Twist" spent a total of only three weeks at the top of the charts, but did so twice in two separate runs more than a year apart.

"It's the only song that was ever No. 1 in two different chart runs," he said.

Checker said he was gratified that Billboard noted the popularity of "The Twist," and lamented that both the song and his career have been at times overlooked.

"My music is less played that any performer that has been a No. 1 chart man on the planet," said Checker, who also had hits with "Pony Time," "The Fly" and "Let's Twist Again," which earned him a Grammy. "I don't get the respect that Rod Stewart gets, or the Rolling Stones, or Frankie Valli. ... But I have to deal with it."

How's this for a twist: Of all the No. 1 songs in the 50 years of the Billboard Hot 100 chart, Chubby Checker's "The Twist" ranks as the most popular single. More...